As I mentioned in my post on The Social Constraints of Bettering The Web, finding a code reviewer can be difficult in Mozilla projects. At least, it’s definitely the case with the Jetpack SDK, which I’m actively involved in as both a reviewer and contributor.

Last week, on casual observation, it seemed like Myk Melez had been getting a lion’s share of code review demands placed on him. While I had some theories on why this might be the case, I also realized that I had no idea what the big picture was as far as code reviews were concerned. As such, I often had no idea who to assign a review to if I could think of more than one person who’d be qualified to do it.

So I put together this prototype dashboard for the Jetpack SDK project: 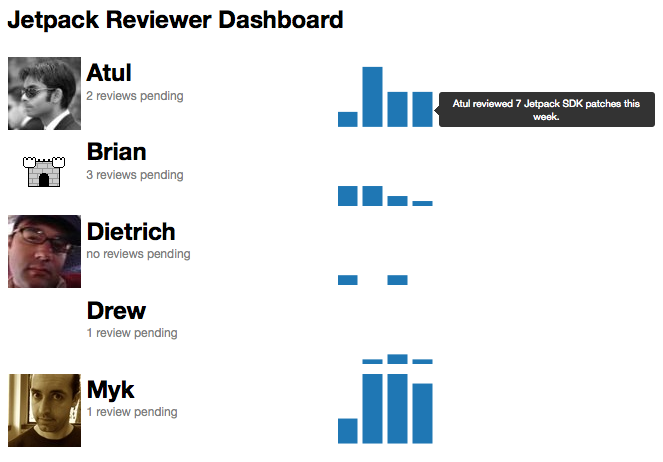 It’s really simple, but it’s a useful enough start that Aza took the code and adapted it to serve as a reviewer dashboard for the awesome Firefox Panorama project.

As with my Bugzilla Dashboard, this is just an HTML page that uses Gerv’s glorious Bugzilla REST API. There is no Django or Rails or other server-side code, so you can fork it on Github and modify it without setting up a server.

There’s some other things that could be useful here:

I think this sort of application could also be used as a “leaderboard” to incentivize code reviews. A few weeks ago, Shawn Wilsher issued the following tweet:

I have this problem where I measure how much work I do based on how much code I write. I haven't been coding much and feel largely useless.

I assume he wrote this because he’d been reviewing tons of code. If that’s the case, a dashboard like this could also be used to help reviewers feel awesome about their work by being publicly recognized for it, while also providing more transparency and accountability about the review process as a whole.